Sweet ideas and events from Sweettrio

A Brief History of Chocolate in America from Sweet Trio

Posted on July 16, 2015 at 10:07 pm by adminTags America, American made, Candy, chocolates, History, locally made, WisconsinLeave a comment 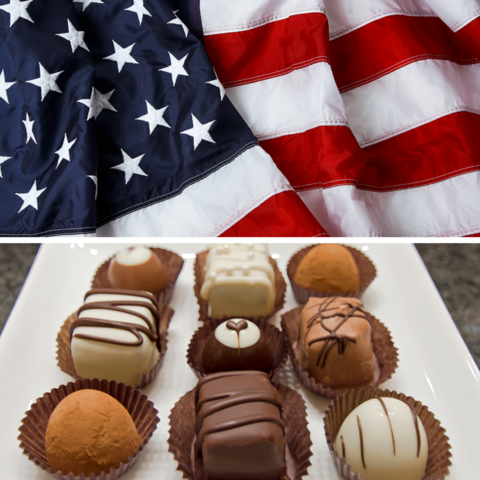 Though fine chocolate is usually associated with Europe (and Sweet Trio uses high-quality European chocolate to this day), the cocoa tree was first cultivated as a crop in Central and South America over 3,000 years ago. Europeans first became aware of chocolate via Columbus and Cortez in the 1500s, and by the mid 1600s the first shops offering chocolate in the form of a drink had opened in Europe.

By the late 1600s, chocolate had arrived in the new American colonies – Benjamin Franklin even sold chocolate alongside the books in his Philadelphia print shop. Other famous early American chocolate fans include George and Martha Washington, Thomas Jefferson, and John and Abigail Adams. Chocolate was even included as a part of American soldiers’ wages during the Revolutionary War.

Chocolate was consumed only in the form of a drink until the mid 1800s, when the first solid eating chocolate appeared –  albeit with a gritty, unappealing texture. In the late 1800s, Rodolphe Lindt of Switzerland developed a method of processing chocolate with a smooth, melt-in your mouth texture, and the most common form of chocolate we know today was born. Industrious Americans started many of the huge chocolate companies that are still around today.

Here are a few of our favorite American chocolate facts:

Today, amazing artisanal chocolate creations are being produced in America – much more than mass-produced milk chocolate. California company Scharffen Berger (now owned by Hershey’s) was one of the first American companies that re-introduced America to more creative, higher-quality chocolate. This trend has continued to grow, with darker chocolates and creative flavors like sea salt being seen almost everywhere. Want to sample American chocolate history in the making? You can easily bring home a piece (or ten) of top quality American-made chocolates with a visit to Sweet Trio in Grafton, Wisconsin.

Dos and Don’ts for Golf Outing Giveaways from Sweet Trio

Local Gift Ideas for a Special Mother’s Day in Wisconsin

May 6, 2015 at 9:57 pmLeave a comment
Looking for a way to make Mother’s Day truly special this year? Here are some tips